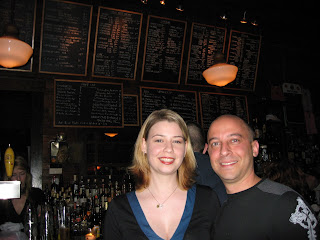 {{More Photos from the trip HERE}}
J and I went to New Orleans last week - I hadn't been there since 2000, so it was the first time for me since Katrina. It's a weird mix between renovated houses that are completely redone, empty houses that look like the flood happened only a week ago and other areas where, truly, they were probably falling apart before anyway and now the situation has exacerbated the problem. 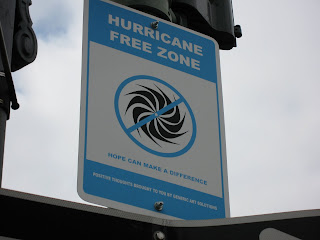 As we drove into the area, you first pass Slidell and then the outer part of New Orleans, which, according to what you can see from the highway, is full of empty, boarded up and fenced off aparment complexes and neighborhoods. There was a Wal-Mart that had yet to reopen. J recalled having seen that same Wal-Mart parking lot full of tents when he came here about 3 months after Katrina. I was pissy when I thought about how Wal-mart was so quick to run commercials touting their support for the people affected by the hurricanes, but now can't seem to be bothered to reinvest in this community and offer much-needed jobs. But then, I didn't see really any work being done on the abandoned neighborhoods (except demolition) - so maybe there simply is no need for a Wal-Mart? 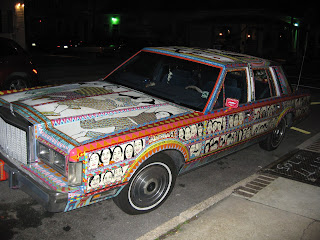 We arrived to our hotel, the Rennaisance Arts, got cleaned up and then headed out for dinner. We asked around for a true down-home style NO restaurant, but we wound up at Brennans and that wound up being one of those typical places that is mostly known because it's been around for-EV-er despite the food now being mediocre and waaaay overpriced ($100+ for 2 people and only 1 drink each!). BUT we shared a wonderful Bananas Foster, which was especially yummy because apparently this was where the dessert was created (due to an overflow of banana shipments). I like eating history! 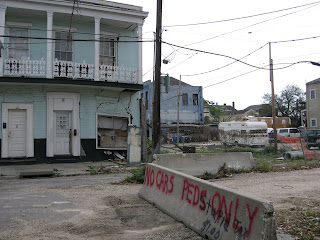 Next day J had to work and I took a long walk down Magazine Street. I walked for almost 3 miles and saw the aforementioned mishmash of up, down and everything inbetween houses & businesses. Once I got to the retail section, that's when the human element, namely desperation, kicked in. Every salesperson I met had an underlying panic/fear/stress about the lack of tourists and money being spent. There they are, trying their darndest to get back to normal, opening their stores everyday, but with few people coming by to shop. They were very chatty - much more so, I believe, than before Katrina - and were full of questions. Where I am from, why I was there (J's business), what kind of business...? This was one time I felt no guilt spending money freely because I knew they needed to business so much.

I didn't leave a single store without the shop keeper strongly encouraging me to come back and bring friends. Or at the very least tell everyone I know that it's time to come back to New Orleans. 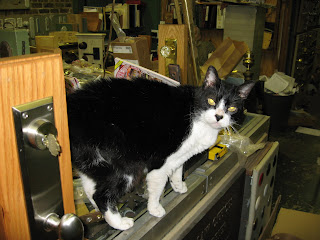 My fave shops: Winky's (I spent the most here for some great funky clothes and a postcard that says "Gnome on the range"; Brass Menagerie (a reproduction house hardware store run by an old couple and their cat with the heart-shaped shot on it's nose, Domino); and Derby Pottery.

That theme carried over into the evening when we were given two rounds of drinks by 2 different people at the d.b.a. bar on Frenchman Street. 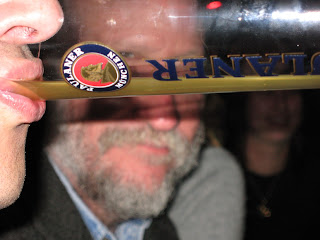