This is why you should know what you download...

...because you are really no better than the people who did this: http://www.luclatulippe.com/2008/04/18/book-publisher-in-china-plagiarizes-and-steals-illustrations/
Posted by Kat(i)e at 4:30 PM No comments:

About a year ago I asked Jon if we could make a place in the guest bedroom where I would make crafty things. I really wanted a light table (a work table that is lighted from the inside). But up until now, Jon has been so busy with other things, he wasn't able to work on it. But this year around my birthday got started with it and after working on it on the weekends and some week nights, we finished it this past week!

The glass top and casters came from IKEA and the rest from a home improvement store. The legs are fence posts and Jon added the decorative trim. It's exactly what I wanted and I love it!

We also cleaned up and painted an old wardrobe that I had found at a children's clothing store that was closing. It had been sloppily painted white several times, but with shelves already built in it, it was a steal at $125. I had tried last year to sand it to refinish it, but the white paint was too stubborn, so I opted to paint it bright pink instead. Jon calls it the "Pink Elephant in the Room."

You can see all the photos at MY FLICKR PAGE 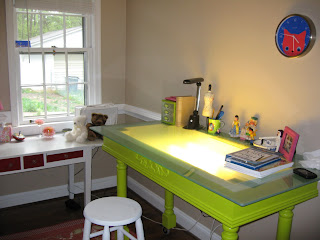