Family and other indisposable things

Our wedding is inching closer and closer, faster and faster. I have officically busted the budget and it seems that everyone's deposit is due right now, $500 here, $1,000 there - it's adding up and freaking me out. And I really am trying my best to find the best deals while not compromising too much on quality. At this point I'm only nervous about the baker - I'm sure it'll be lovely cake, but I'm worried it'll taste like wedding cake and I've never really liked wedding cake. There is a difference between cake and wedding cake. I don't know what happens to make them different, I just know that eventhough I like to eat cake, I rarely like the cake served at weddings. There's something dry and too-sweet and yet nearly flavorless about wedding cakes. At least to me.

But this is one of the two bakers everyone suggested to use and the other one won't make the groom's cake the way I want, so that's that. There is only so much time you can spend on each part of the wedding or else you'll drive yourself crazy. And because I do want our wedding to feel like a wedding, you pretty much have to have a cake and flowers and all the other stuff that makes a wedding a wedding.

Which brings me to family. As the wedding nears, the distance between me and my family becomes increasingly painful. I am lucky in that I am not referring to emotional distance, just old fashioned miles of space. My mom, stepdad, little brother and one of my sisters and her family all live way far north and I live in the South.

The distance slashes across my heart because I know that it won't be long after we get married that we're going to try to start having a baby and I won't have my mother around for comfort and help. Yes, J's family in here, but we're not really close. We're all friendly with each otherand it's nothing against his sisters, but honestly I'd just prefer to have my own mother and sister with me. I guess it's just a comfort/familiarity/blood thing.

I've turned this over and over in my head and there's just no reasonable solution to it. They like living up there and actively dislike how land-locked we are. We like living down here and actively disike the cold, grey weather they have up there. Not to mention that everyone has their jobs and homes and what-not that makes it practically impossible to move. The prospect of having children who don't really know their Grandparents and other family members makes me so very sad, it almost makes me not want to have any - the emotion is just that strong.

Not to mention everything I've missed in my little brother's life. He's 15 now and I get to see him twice a year at best. Same goes for my sister and her kids. My niece Sam hardly even knows I exist. That kills me. When I moved down here after college I never really thought about how drastic the distance would prove to be. We had always moved around so much, I think there was a part of me that believed we'd all end up living near to each other somehow.

I think one thing that makes this so tragic for me is that I always liked/loved/appreciated how close our family was considering and despite the divorce, step-parents, half-siblings and many, many moves that happened, for better or worse. I think this led me to believe that my family would do the same - not let outside things affect our sense of family and always come back together in the end.

Maybe that was just my perception, a romanticised memory. In reality my older half-siblings were parted with our common father at ages 3 and 4 by marrying my mother and moving away and then my immediate sister and I were parted with him after he left and our mom's marriage moved us away from him when we were 10 and 11 years old. All of us, our dad's children, spent the rest of our lives as occasional guests at his house, but all of the kids, though legally only half-siblings, all refer to each other fondly and willingly as just sisters and brother - even my younger half-brother, who has absolutely no blood relation to my older half-sister and half-brother, is regarded as family.

That said, this kind of openness in titles and affiliation has also led to some strain - my stepdad calls me his daughter, something that I like - but he would like and has asked that I call him "dad" - something I just can't do. It's not anything against him - he's known me since I was 10, he went through my teen years much more acutely than my own dad who saw me only 5 times, two weeks at a time, while I aged from 12 to 17. But I just can't bring myself to call him "dad." I've tried to explain this to him - that if my own father had really cut out and left completely or died, then I could and would be happy to transfer the title. But my dad didn't and he's not, so I can't.

Anyway, the point is I am sad, upset, pissed, torn...etc. about not having my family closer to home - so that it can really feel like home.
Posted by Kat(i)e at 2:56 PM No comments:

Now this is what they call... 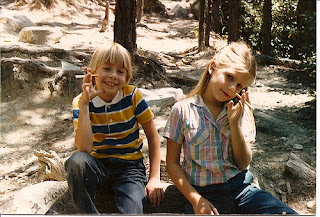 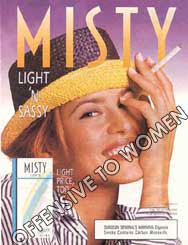 This photo was taken by my dad when we were on a hike up Pilot Mountain in N.C. and came across a pack of cig's on the trail. Dad thought it would be funny but no one helped us pose at all - we were influenced, I believe, by all of the billboard ads that showed pictures like this Misty ad. Creepy, huh?
Posted by Kat(i)e at 1:45 PM No comments:

{This post says "I am searching for my friends from Stuttgart, Isolde and Dorothee. Their nicknames are Iso and Dodo. Do you know them? Please get in touch with me! I miss them so much!" I wrote this because I lost touch with them and thought, hey, people google their own names all the time, maybe this post will come up in the search - and it worked! Dodo emailed me about a month later and then Iso came to visit. This internet thing is pretty darn swell, doncha think?}
Posted by Kat(i)e at 12:55 AM No comments: