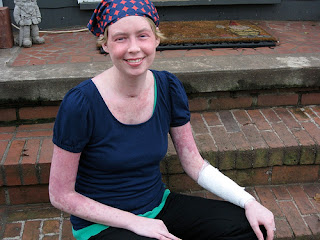 OKay, okay - you guys have been bugging me to start blogging again, so here goes! As many of you know, I was resently discharged from the hospital after a long (35 days!), difficult and nearly fatal stay at Grady Hospital's Burn Unit as a result of being struck by Toxic Epidermis Necrolysis (TENs). I entered the hospital on June 2, 2007 and left July 6. It was an ordeal to say the least - although the medication they used on me (Versed [ver-said]) put me in a coma and later gave me amnesia, so I really don't remember much of it.
You can read a day-by-day account of it as written by my wonderful friend, Reena, at http://heyjeeves.blogspot.com - but I must warn you that some of it is medically graphic. I haven't even read most of it (except your sweet comments!) because it upsets me.
Anyway, I've been home for a little over 2 weeks now and things are coming along pretty well. The doctors are all impressed with the speed with which I'm recovering but I'll be honest and say that I definitely have my moments when I am really frustrated. Nobody likes having really tender and dry skin and mine is a lot of both.

But let's talk about happier things like our wedding! We have postponed it from Aug. 18th to January 19th, 2008 - with all of wedding day plans remaining the same. So now it'll be a "winter" wedding (it is Georgia after all, so I doubt we'll have very wintery weather!). But I might just get to wear one of those faux fur wraps - oh-la-la!
Posted by Kat(i)e at 6:10 PM No comments: