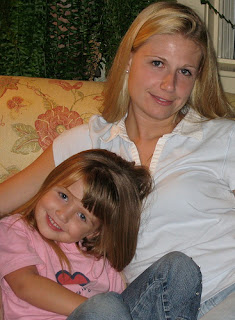 As I mentioned in an earlier post, I was on Cape Cod visiting family recently. During this time I finally got to spend some real time with my little 3 year old niece, Samantha. Even though I've seen her a few times before, they were when she was younger and not frequent enough for her to really know or remember me. So I was really pleased to see her for several hours over the course of 3 days - this time I think I made it onto her list of "People I know and Like"!
The relationship started off a little shaky, but began to become secured when I presented her with a little pink package of "body jewels" from the restaurant's bathroom automat. {Ah, it really is the little things that work best...remember how your parents would buy you something big but then you played mostly with the box it came in?}
A couple days later I went with Mimi (my little sister and the mom of Samantha) to see son/brother, Jonathan, play his first Ice Hockey scrimmage of the season. Sam and I went to the snack bar while Mimi went to help tie Jonathan's skates. I was worried that Sam might be freaked out that she was being left with this stranger while her mom disappeared from sight, but no, she happily clung (clinged?) to my thigh like 3 year olds are apt to do while we waited in line for a hot dog and fries (she likes ketchup A LOT).
Later, as we sat watching Jonathan skate, Samantha pointed to the still-purple scars on my arm and asked "What is that?" I thought to myself,'This is my chance to see how she feels about me!' and told her they were boo-boos from when I was sick in the hospital and asked if she wouldn't mind kissing it to help me feel better. She looked me in the eye, then looked closely at the scar and pondered the importance of her healing kisses and whether I was a deserving recipient. I had my answer when she mustered up the guts and kissed my yucky scar - finishing with an smile of accomplishment. It was wonderful.
Another Samantha story is that she was mixed up about my little brother's name: Johannes. It's pronounced "Yo-hahn-ness" but she thought people were saying "Your Hahness" and she began referring to him as "My Hahness." That is ding-darn cute, if I do say so myself (and I do). It reminded me of how when Johannes was young he called me Didi instead of Katie, so his big sisters were Mimi and Didi. 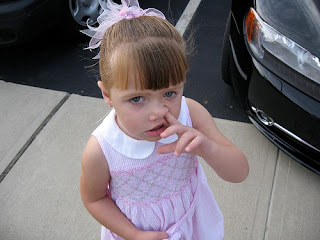 {The top pic is of Mimi and Samantha. The bottom pic is the result of when I asked Sam to "look pretty" for the camera on our way into church.}
Posted by Kat(i)e at 9:00 PM

Johannes was one smart cookie even when he was little then..."didi" means older sister in Hindi :)